It's a well known fact that Viking's might not have the most appealing food culture. Let's face it, no matter how much timian you sprinkle on that pickled herring it's still gonna be pickled herring.

Viking food in general tends to be rather nauseating for those unaccustomed to the methods and ingredients Vikings tend to use but even some Vikings cringe at the sight of traditional Icelandic food, myself included.

You, my axe-wielding friend, may find some of it to be cringe-worthy, weird and even alien, but some of it's actually not bad as you'll see in your Viking's Guide To Traditional Icelandic Food. 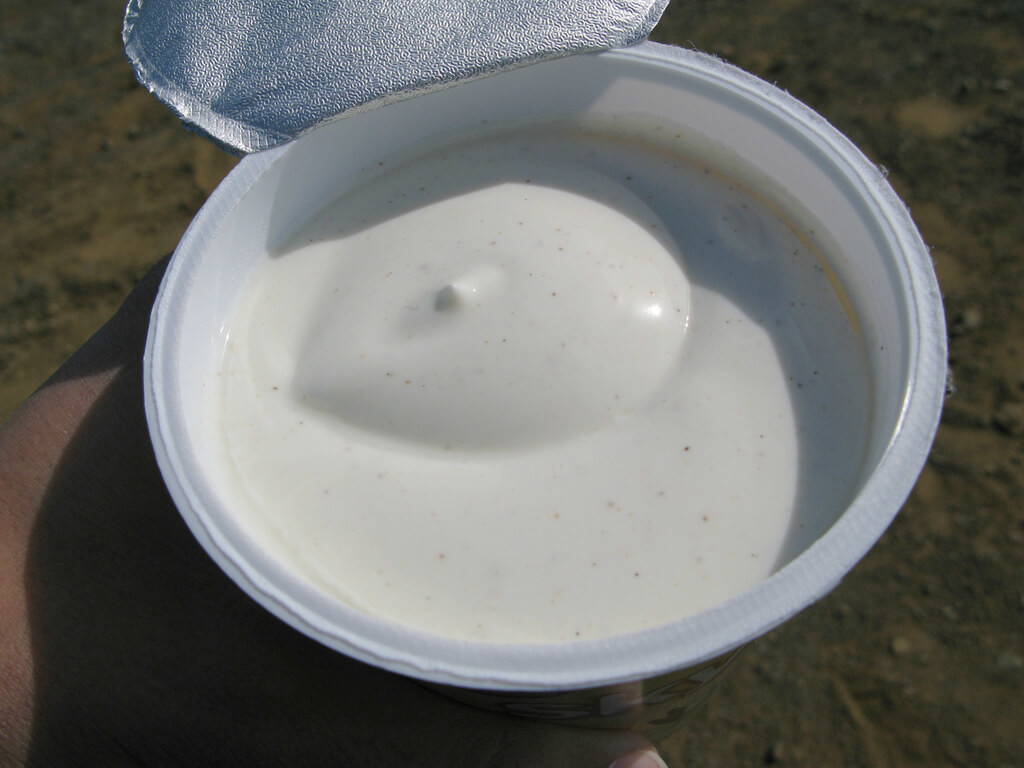 Skyr may not be originally Icelandic, but Icelanders kept Skyr close to their hearts all the way into modern days while the practice died out with the rest of Scandinavia long time ago, giving cause to why non-Icelandic Vikings may not have heard of it before.

Skyr could be best described as a cultured dairy product with the consistency of greek yogurt. It's packed full of protein and even rumored to be a source of the great strength that dwells within the Icelandic strongmen. If Skyr happens to become a favorite amongst your clan I can promise that your warriors will live longer, happier and better lives. 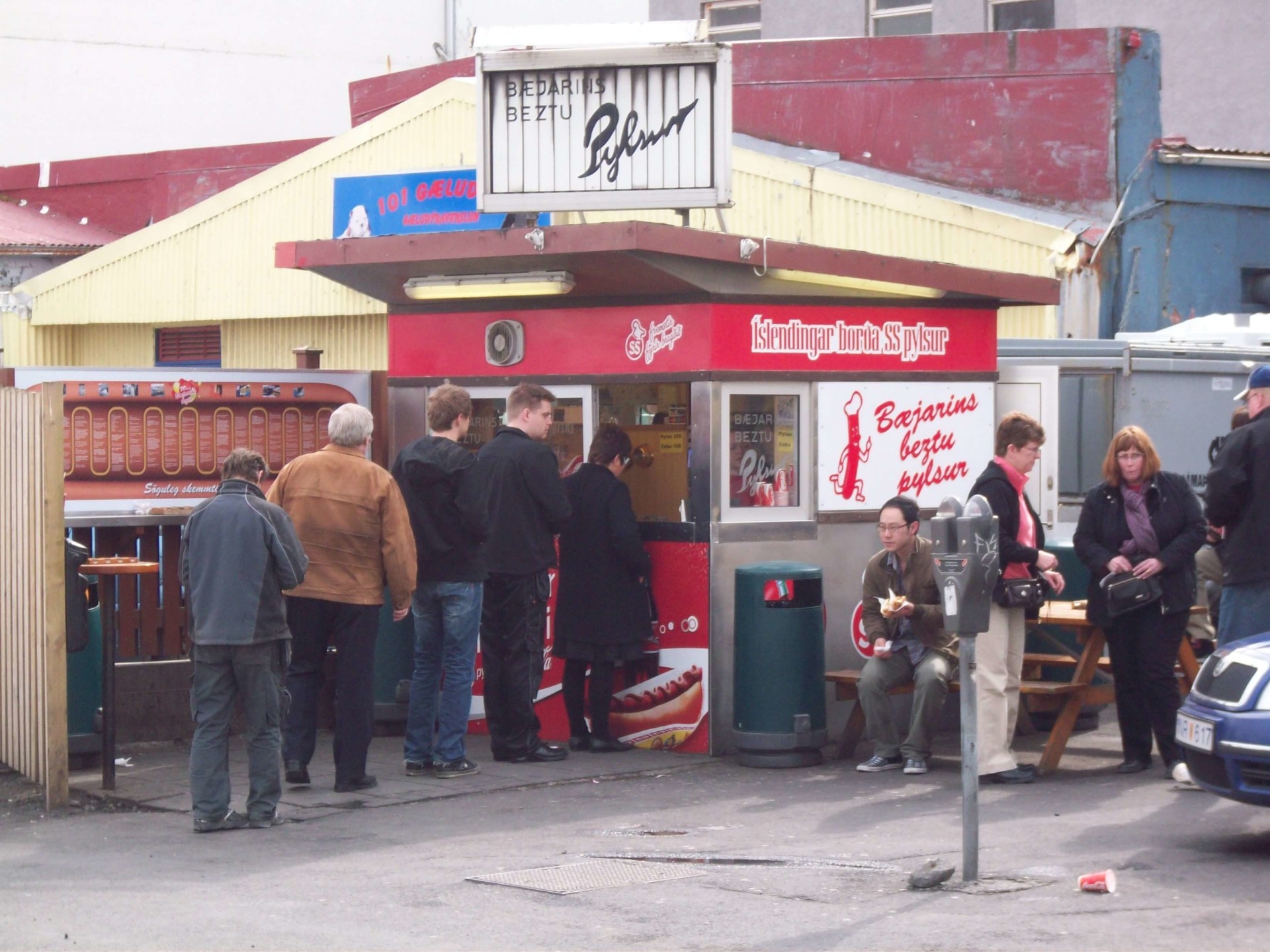 A hot dog? What blasphemy is this! I came here for Icelandic food and I get hot dogs?

Settle down, big guy. Hot dogs might be pretty standard for any country but in Iceland the hot dog, or ?Pylsa?, is a national favorite to a point where the most popular food joint in the country is in fact a hot dog stand called Bæjarins Beztu Pylsur.

I'm a big fan of the Icelandic Pylsa and whenever I travel to other countries I do try the local hot dogs but they never seem to come close to the taste of the Pylsa. At first I thought it was just a simple case of people usually preferring their own domestic products but after hearing probably well over a hundred tourists say that the Pylsa is the best hot dog they've had, I'm convinced that the Pylsa might in fact be the best hot dog in the world. 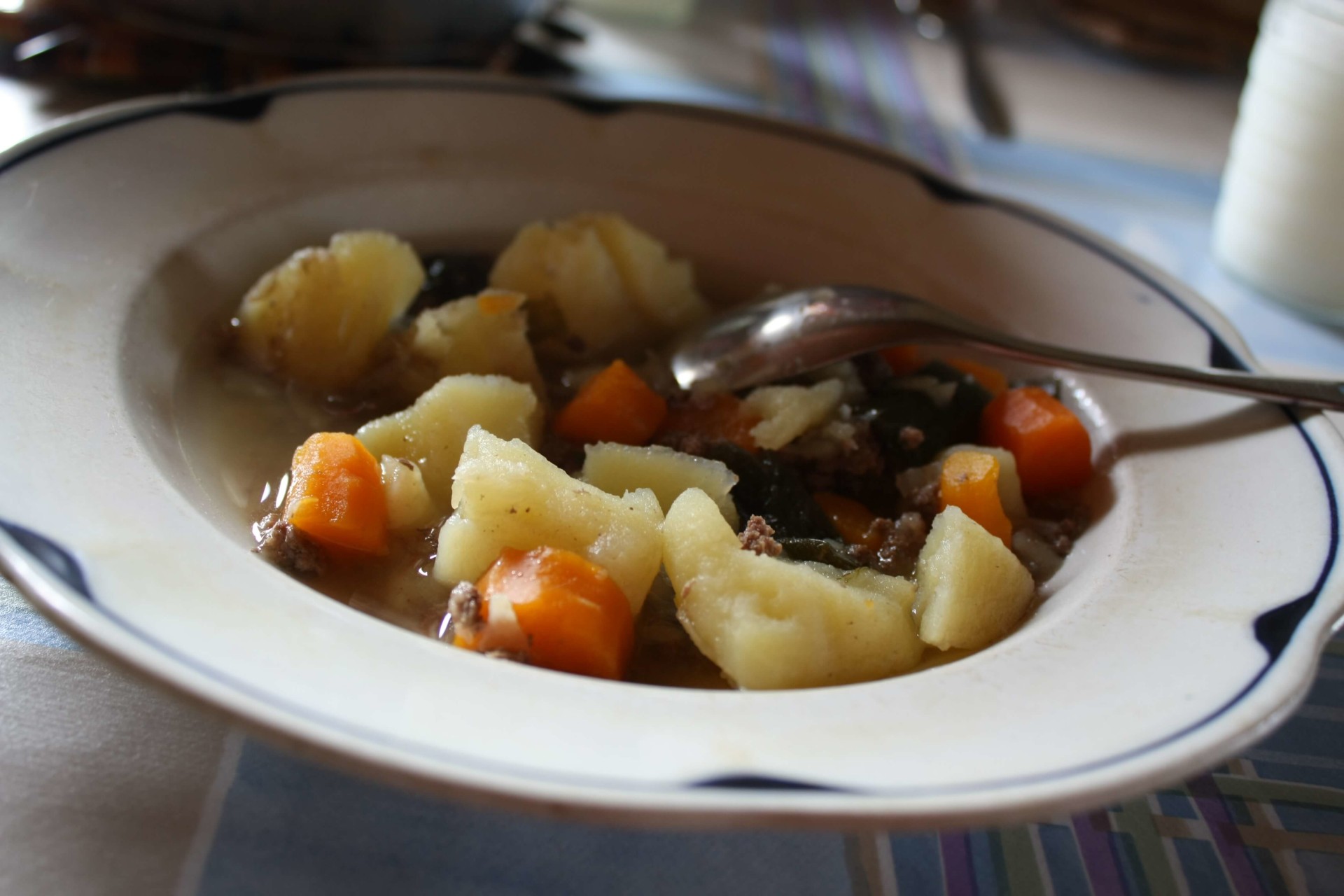 The Icelandic Meat Soup, or ?Kjötsúpa?, is quite possibly one of the most traditional dishes made in Iceland. It consists of lamb shoulder, chopped up into little chunks that fit on your spoon but are still large enough to provide you with a mouthful each time you bring the spoon up to your lips.

It's fat and brimming with vegetables and herbs that supposedly carry healing powers that'll help you get over illnesses like a cold (or a hangover). 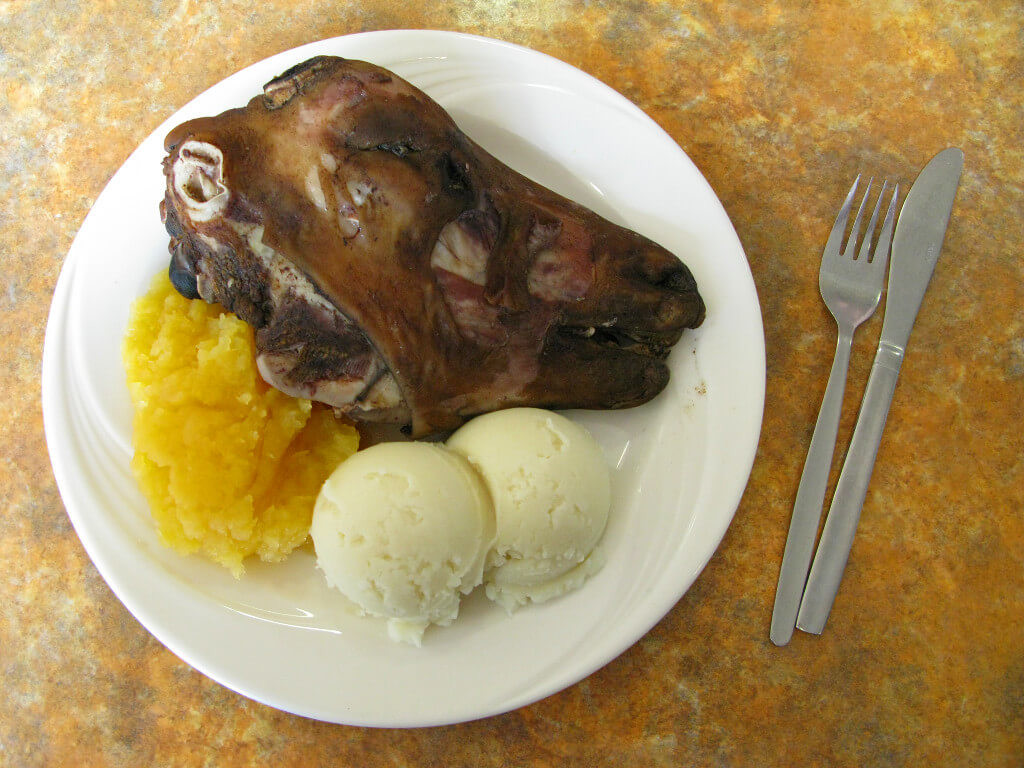 I think I've covered the good food traditions pretty nicely, now let's take a walk through the darker side of Icelandic culinary traditions, starting with the Svið. It's basically the head of a sheep cut in half, singed to remove any fur and then boiled. The Svið is usually served with mashed turnips and potatoes alone and only the hardest of Vikings leave nothing left on their plate except the bones. Even the eyeball is eaten and considered a delicacy by most who still eat Svið.

It's a tradition that began when poverty was rampant in Iceland and people could not afford to let any part of the sheep go to waste. It's a popular dish during the Þorrablót holiday feasts and even more popular in the houses of grandmas and granddads throughout the country. I have to admit that my Viking blood does not really run deep enough for me to try the Svið. I don't know about you, but I prefer my food not to have the face still attached while I'm eating it. 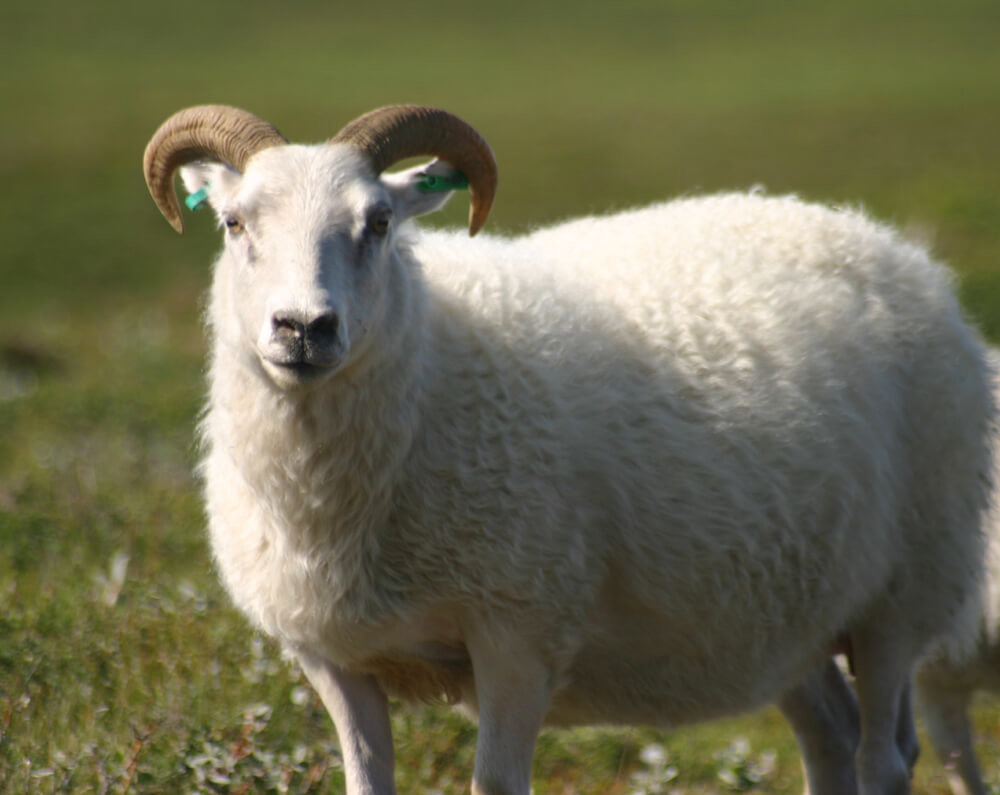 Imagine being served a pair of testicles, pressed into blocks after being boiled and cured in lactic acid. Well, that's precisely what Hrútspungar is. Another popular selection at this year's Þorrablót, they're the testicles of some poor ram that's now walking around, emasculated and insecure.

It's another blow to my Viking identity as I can not claim to have eaten it. It's just, well, I prefer my food not to have been part of an animal's reproductive organ. 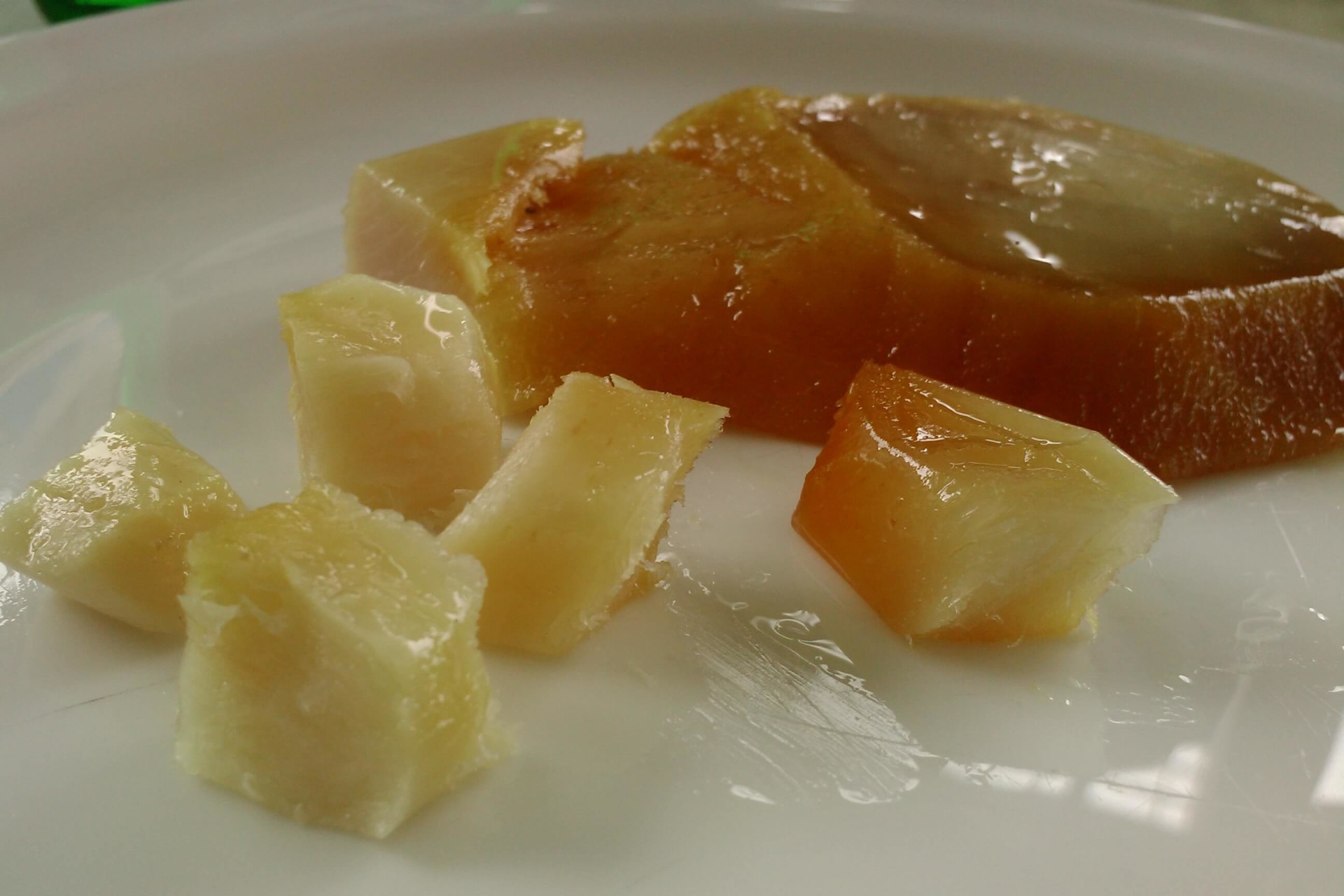 The most popular dare for tourists and even Icelanders, the Hákarl is a fermented shark that carries such a pungent flavor that even Gordon Ramsay failed to keep it down. The tradition began when some unlucky Viking took a bite out of a fresh shark and dropped dead due to the high concentration of urea and trimethylamine oxide (I googled it).

The Vikings then developed a process to clear the toxins from the shark by burying it in sand for up to 12 weeks, allowing it to ferment. After the curing process it's hung out to dry for several months until it's all crusty, at which point the brown crust is removed and the meat is cut up into little cubes and packaged for general consumption by those with balls big enough.

No, I've not tried the shark as I prefer my food not to be ferm- oh who am I kidding? I'm just a big ol' weenie. But I think, of the last three, I would most likely try the shark over the others. Severed testicles and faces are never entering these lips.

If you're traveling to Iceland then I dare you to try the shark with a shot of Brennivín. If you do, who knows. I might do the same.