The airport environment in Iceland can often be confusing to travelers, especially in the cases when travelers confuse the Reykjavik domestic airport (RKV) for Keflavík Airport (KEF).

This is understandable of course, as the airlines usually print "Reykjavík (KEF)" on their tickets, despite the correct designation being Keflavík International Airport, or "KEF Airport".

Unfortunately, this does cause a fair few mix-ups so, to be clear, Keflavík International Airport (KEF) is the only truly international airport in Iceland, but it's close enough to Reykjavík that the airlines can choose to print Reykjavík instead of Keflavik on their tickets.

The Reykjavik Airport (RVK) is a small domestic airport located in the city's center with regular flights to:

So, make sure to select your car rental pick-up is from Keflavik and not Reykjavik.

The largest selection of Car Rentals in Iceland

What airlines fly to KEF Airport in Iceland?

The primary carrier at KEF Airport is Icelandair and, a new airline called PLAY Airlines.

Destinations for Icelandair and PLAY

Another large Icelandic carrier was Wow Air but as of early 2019, Wow Air is no longer operational.

What Shops or Restaurants are in Keflavik Airport?

There is a duty-free store located in both arrivals and departures, where we would recommend purchasing any alcohol you intend on consuming (alcohol is very expensive in Iceland due to severe taxation).

It is here that I would also recommend you purchase the Icelandic candy you wish to try or take home to your family and/or friends.

Besides the duty-free store, you will also find the following shops and restaurants in KEF Airport:

Most of the stores and restaurants are located on the second floor, as you will see in the image below. (Photo from Kefairport.is).

A popular pitstop at the airport is the tax refund desk. I would recommend getting to the airport extra early if you intend on claiming tax back, as the desk is always extremely busy.

What Is Close To Keflavik Airport?

Keflavik is a very small area, and also quite remote. There isn't a lot, but it does have all the necessities and is usually a great stopping point for late night and early morning arrivals. It is also the last stop for many travelers, before their departure.

The rock and roll museum shows the great history of Icelandic music as a whole, dating back to the 1920's whilst Viking World is a five exhibition museum along with a settlement zoo, a playground, and an outdoor classroom.

Keflavik is also home to a large indoor water park called 'Water World', which has a heated activity pool. This is a great place for children to play and have fun.

These destinations are part of the 'Reykjanes Peninsula'.

The most popular destination, which is around a 20-minute drive from Keflavik International, is the world-famous Blue Lagoon, A geothermal spa named by National Geographic as one of the 'wonders of the world'.

How do I get from Keflavik Airport to Reykjavik?

Some of you may be renting a vehicle. In most cases, you pick up the vehicle directly from or around Keflavik Airport. So, therefore, you're free to drive into Reykjavik at your own accord (around 40-45 minute drive).

However, if you are not renting a vehicle then there are 2 options: take a taxi or take a bus / airport transfer. Our recommendation would be to take one of the bus transfers as a taxi from the airport to Reykjavik can set you back around 17,000 ISK (?134).

This is why most travelers will use one of the many airport transfers. The two of the more popular options are Gray Line and Airport Express. 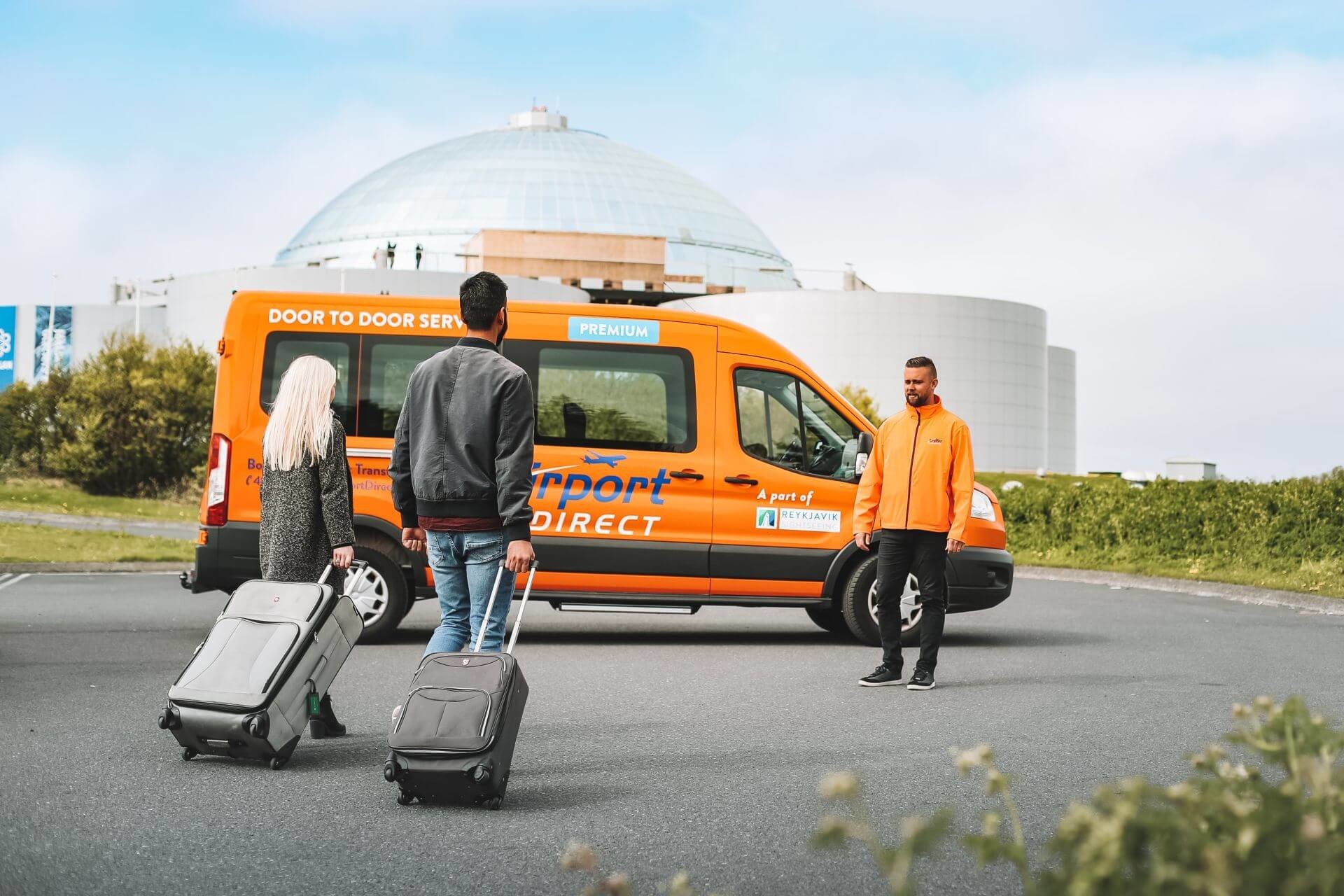 Both services are available for return to the airport and provide a 24/7 pickup from your hotel.

For those of you that have rented a car, most agencies are based in Keflavik and offer 24/7 return. However, there are some located solely in Reykjavik. Though, the agencies may offer to drive you back to the airport or to BSÍ bus terminal so you can get a bus transfer.

What can I do on a Layover in Iceland?

As previously discussed, there are plenty of things to do in the surrounding area of the airport.

There's the option of renting a car for a few hours or even taking a bus to the Blue Lagoon. There are also regular buses back to the airport.

You could also book one of these tours:

Renting a Car at KEF Airport

Many rental agencies will meet you in the arrivals zone of the airport, whilst others have a free shuttle service running every 15 minutes to the car rental area (look for the 'car rental shuttle service' signs).

There are some agencies based in Reykjavik, and they might either charge a fee to pick you up from the KEF airport or provide you with a Flybus ticket to transfer from Keflavik airport to the bus station (BSÍ) in Reykjavik where they would then pick you up.

The bottom line is, make sure to get familiar with which pick-up process is valid for your booking. This is usually stated on your voucher or on the page where you booked the car.

If you are renting a vehicle then there are usually 3 varying return procedures. Returning directly to the airport, returning to the agency's office in Keflavík and then being driven to the airport or returning in Reykjavik and getting one of the bus transfers back to the airport.

We always recommend that you return your vehicle AT LEAST 2 and a half hours before your flight time. This is because Keflavik airport is very busy, and can take a long time to check-in, get through customs and visit the tax refund desk.

The process for returning your vehicle and then being driven to the agency may sometimes take upwards of 30 minutes or more, so be sure to give yourselves plenty of time to prevent last-minute panicking.

The same goes for those of you returning by taxi or by bus transfer, ensure that you will arrive 2 hours before your flight. Especially if you intend on heading to the tax refund desk. The queue for this can be very long.

There is only one exclusive lounge at Keflavík Airport, the Icelandair Saga Lounge. The amenities there include:

How big is KEF Airport?

As stated on Airport Technology Keflavik International Airport is spead over 25km² or 9.6 sq miles and is the largest airport in Iceland.

How many runways does KEF Airport operate?

How many terminals are there in KEF ?

ISAVIA's masterplan from 2018 sates that they will extend yet again making the terminal 25.000 sq meters costing roughly 15 billion ISK.

Bellow you will find a video of past extensions as well as future developments in KEF Airport.

How can we help?

How to get from keflavik airport to reykjavik city